1st Jan. As the new year opens, I, like a moko kakariki (local green gecko), appear afresh, a glorious healthy green, after a skin slough. The joys and the challenges of 2020 are behind, no going back, and in my new skin I’m so ready for this new beginning.

2nd Jan. I’ve decided to eschew alcohol this month. It’s an experiment in wellbeing – does alcohol keep me from staying centred and staying ‘me’ in social situations?

8th Jan. Consumed by the situation unfolding in the States., doomscrolling fills much of my day. This in turn frustrates me! Twitter-sized doses feed an underlying addiction to cortisol. I’m hooked!

9th Jan. Donning my hi vis Zero-Waste-Granny vest, I’m off by bike via the Opua car ferry to Russell. It’s a chance to get bike fit and support the annual Tall Ships Race celebration. Recycling bins are set up and our job is to direct revellers in putting hangi food scraps, compostable plates, bottles and cans, and,regrettably, landill bound foil and plastic forks. 900 portions of the best hangi (yes, vegetarians catered for too) I’ve ever tasted, delivered within a friendly community atmosphere. Sated by food, useful discussions, and a job well done, I delight in the ferry ride to Paihia and cycle home in the dark over the hill back home.

10th Jan. I’m attempting oat milk. Keen to stop purchasing Tetrapaks – my biggest regular source of landfill rubbish – a friend has forwarded a recipe. 1 cup rolled oats. 4 cups water. Blend 45 seconds. That was easy! But straining through a teatowel is painfully slow and I end up squeezing it like a cow’s udder. The result is disappointingly watery…

16th Jan. By 7.30am I’ve cycled over the hill to the mangrove area beside the road. In 20 minutes the rubbish bag I’ve brought is full with roadside rubbish I’d seen from my car earlier this week. Life amongst the mangrove roots had called to me and I’ve answered. Biking homewards, my day’s schedule stacked with personal and business issues, feels easier to tackle. In a few precious minutes, I’ve discovered my flow with the web of life. There’s no better feeling. Thanks to me, all that plastic and other rubbish won’t tangle around the incredible life in the mangrove ecosystem, and I’ve recharged with flow. Win-win.

THE NATURAL WORLD – SACRED OR SECULAR?

I’m cycling the beautiful Taranaki Surf Highway, pondering how car drivers feel okay tossing out their trash.  ‘Do they believe it miraculously disintegrates?  Or feel they are kindly creating jobs for others to search for litter in roadside drains? Perhaps its just that well-engineered, hermetically sealed and air-conditioned vehicles become disconnected from the sacredness of the living nature of which they are a part, or is the alienation due to ‘Macdonaldisation’ and where outcomes are disocciated from reality through a screen. Or does today’s speed of travelling just mean roadsides flash past unseen? For me slowly cycling by (and yes, I’m not as fit as I would like) each verge, stream, plant and animal becomes my world and I theirs’, joined within the sacredness of creation, before in a slow dance we move apart once more.

Under my cycle helmet, my mind generates potential solutions.  Get young adults out on bikes into the countryside maybe, or ask GPs to prescribe bush walks, or perhaps insist high school students spend time within a forest at regular intervals? Or is it through creating urban natural spaces, not trimmed and mowed and pruned, but spaces alive with creation, flowering native plants, seed loving birds, invertebrates, streams alive with life, that Kiwis and visitors may once again learn to love and revere the natural environment?  How best to grow that reverence, and how to protect our natural world until its sacredness is understood by all?

BOTTLE AND CAN REFUNDS!

As I pedal happily along pondering options, ‘Bring back container deposits’ reverberates the loudest in my head.  10c on every plastic bottle and I bet each one of these on the roadside would be gone within a month, scavenged by kids or clubs looking for funds.  Or raise it to 50c and I am fairly sure not a single milk or coke bottle would go to the landfill, and clean uncontaminated resource would be gathered for recycling.   Give people this incentive not to litter as well as for others to tidy up after them and it’ll be worth opening new regional recycling plants.  That’ll be the day, when there’s no need for quantities of plastic waste to be shipped overseas or trucked long-distance to the sole Auckland plant.

Local Councils are all in favour as ratepayers would save $40M a year, and it would create 2000 new jobs (http://www.stuff.co.nz/environment/82448067/calls-grow-for-a-return-to-the-days-when-we-were-paid-to-recycle) so my feeling is our current Government is merely maintaining the status quo due to lobbying from the powerful NZ packaging and drinks companies.

HOW HARD WOULD IT BE TO BRING IN DRINKS CONTAINER REFUNDS?

It works in South Australia. Last year 43 million tonnes were recovered, earning $53 M for the community. So why not here? 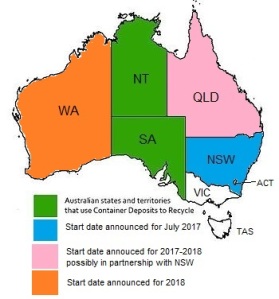 WHAT CAN I DO?

What is needed – why, consumer pressure of course!   Personally, my feeling is that the Councils have done their best, and that now its up to us citizens to create the groundswell that will force the change. That’s how change always happens…..

I’m making a start with the goal until July 2017 is each week to write a minimum of one email or message, talk with movers and shakers wherever and whenever, and post or message one drink company Facebook page. Its actually quite fun, as I get all sorts of responses, and if I dont I write again, or call…  Recently I’ve written to Coca Cola, Pepsi Cola, and Taranaki tourism about roadside litter and container deposits, and to Te Papa and KiwiRail about recycling.  Now I’m making an appointment to see our local MP about the topic…

Watch this space. I’ll let you know how I get on….

On November 10, 2016January 10, 2021 By wellwhynot2016In Musings and Miscellany, Rubbish, UncategorizedLeave a comment

PLASTIC-FREE JULY – A PERSONAL TALE by Jane Banfield.
I’ve signed up for the whole month of July. To quit single-use plastic. 3 months ago I’d never even heard of single-use plastic. Now what’s going on?
I’m an addict, I can see that. To single-use plastic. What I can’t see is how I can cope without it – its central to my day. Its so convenient. I’m hooked. On a busy evenin

g, I tear open a packet and create a meal. I cover the leftovers. Leaving home the next day, a courier parcel arrives, an internet order. I stop on my journey and buy a quick snack…. You get my drift.
You know what scares me the most? That I’ll fail. Publicly. I’m standing up saying, here I am at 58 years old, and I’m a single-use plastic addict. I can’t see how I can quit. I’m hooked on plastic and its convenience. I’ll be so ashamed when I fail.
I came to the Bay of Islands to live 30 years ago. It was my every dream come true. Living by the sea. Enjoying the Bay. 30 years of swimming, sailing, windsurfing, kayaking. And a view of the sea. I’ve valued the sea, I’ve used the sea.
I’ve got two gorgeous grandsons, 3 amazing daughters, and I look to their future, knowing that I am an addict. A single-use plastic addict with an addiction that supports the destruction of their future.
Today I’m still not clear what scares me more. Aiding and abetting the destruction of their future or quitting my addiction.
At least today there’s still 3 days to go…. #plasticfreejuly#noexcuseforsingleuse #myplasticyourmokupuna